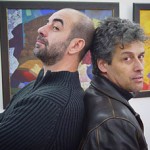 1988 – First Prize at the Drawing Biennial in El Ferrol, Spain

The artist works in the field of graphic, advertising, illustration and painting.

Valentin Angelov's works are inspired by antique, mythological and philosophical themes which he recreates by combining realistic and unrealistic figures.

His pictures are owned by the National Art Gallery, Sofia, Sofia City Art Gallery, as well as by private collections in Bulgaria and abroad.

Your ticket for the: Valentin Angelov